In addition to its delicious taste, bok choy (sometimes referred to as white cabbage or Chinese cabbage) has terrific health benefits with almost no calories. One cup of cooked bok choy has about the same amount of calcium as 1/2 cup of milk, and the calcium it contains is well-absorbed. Bok choy is lower in oxalate than most other leafy greens, which is a substance that binds with calcium and prevents it from being absorbed. Amazingly, 54% of the calcium in bok choy can be absorbed by the human body, compared to 5% in spinach and 32% in milk.

Rich in vitamins like vitamin A, C, and K, one cup of bok choy contains about half the daily requirement for each of these nutrients, as well as a good amount of folate and vitamin B6. It is also low in sodium and is a good source of potassium. Those taking the medicine Coumadin, however, you should not eat more than a small amount of bok choy.

Bok choy is a cruciferous vegetable (like broccoli, cauliflower and Brussels sprouts) and several population studies have shown that people who eat more cruciferious vegetables have a lower risk of developing lung, colon, prostate and endometrial cancers. One reason for this is that the glucosinolates in these vegetables are converted to isothiocyanates in our bodies, which actively fight cancer.

A recent study detected 28 different polyphenols (antioxidant phytochemicals) in bok choy. The most abundant polyphenol that was found in bok choy was kaempferol, a molecule shown to have anti-cancer properties. With only 9 calories per cup in raw Bok choy (or 70 grams), it is one of the most nutrient-dense foods in the world! In addition, it is available basically year-round (except in July and August) but it is best when purchased in the fall and winter.

When cooked, bok choy has a sweet flavor, although its stalks are firm and can be a little bitter for those less accustomed to eating vegetables. Baby bok choy, on the other hand, has an especially mild taste and is more readily accepted by everyone! When cooking mature bok choy, it’s best to not cook it whole, 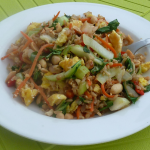 because the stems take more time to cook than the leaves. Instead, separate the leaves from the stalks and cut them into pieces. My favorite way to prepare bok choy is to stir-fry it in olive oil and garlic and to add salt just prior to serving. Ginger, soy sauce and/or hot peppers can also be added. Bok choy can be steamed or boiled as well. Bok Choy Fried Rice makes a great, healthy meal. Take February’s Healthy Challenge and eat more of this nutritious and delicious vegetable!

If you are looking for a great-tasting food that can help you begin your day with lasting energy, lose weight, fight disease, and stabilize your blood sugars, eat oatmeal! It's high in dietary fiber, quality protein, and vitamins and minerals, as well as phytonutrients. It is the breakfast of champions!

The Humble but Mighty Cabbage

Common, inexpensive cabbage is chock-full of powerful nutrients that fight disease and promote health in dramatic ways. Below, I will share the best ways to prepare cabbage to maintain its many nutrients and preserve its great flavor.