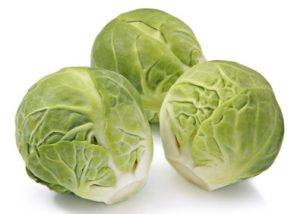 Brussels sprouts, which many people tend to dislike, are making a comeback.  In fact, Joy Bauer, the dietitian on NBC’s “Today Show”, recently declared Brussels sprouts to be “the veggie of the year for 2012” http://bit.ly/zG1d8Z.  Do they taste better than our memory serves, or are they so healthy that they are worth enduring?  A big yes to both!  My mother (sorry Mom) overcooked these babies, which releases sulphurous compounds that gave it an unpleasant smell and taste.  That childhood memory kept me from cooking Brussels sprouts for all these years.  I was awakened to their delicious flavor a year ago when eating at a trendy restaurant (The Copper Onion in Salt Lake City), where the Brussels sprouts were highly recommended.  I’ve been cooking and enjoying them ever since.  Give these vegetables another chance by using better cooking techniques as described below, and you will see why Brussels sprouts went from Britain’s most hated vegetable (2002) to Britain’s 5th favorite vegetable (2005).

Healthy is a bit of an understatement for brussels sprouts, because they are loaded with nutrients that offer protection from vitamin A deficiency, bone loss, and iron-deficiency anemia.  These compounds are believed to protect us against cardiovascular diseases and from many cancers, while at the same time boosting memory.  With only about 55 calories per cup, Brussels sprouts are low in fat and sodium, high in appetite-satisfying fiber, and are cholesterol-free.  They are higher in protein than most vegetables, with more than a quarter of their calories derived from protein.  Brussels Sprouts have three times the level of vitamin C of an orange, and four to six of them contain the adult daily recommended allowance for vitamin C.

In addition to this high level of naturally-occurring vitamin C, Brussels sprouts contain glucosinolates, which have antioxidant and anti-inflammatory properties ,found in a special combination and in greater amounts than many other cruciferous vegetables.  Glucosinolates also help the body to eliminate toxins which can contribute to the development of cancer.  Brussels sprouts are also a storehouse of flavonoid anti-oxidants (like thiocyanates, indoles, lutein, zeaxanthin, sulforaphane and isothiocyanates), which also help to make them a superior cancer-prevention food.  They’re an excellent source of vitamin K, with 1/2 cup providing 137% of the daily percent value.  Vitamin K  plays a potent role in bone formation and strengthening, and may help prevent or at least delay the onset of Alzheimer’s disease.  This once-scorned vegetable also contains very high levels of vitamin A, vitamin B6, potassium, manganese and folic acid.  Also high in thiamin, riboflavin, iron, magnesium, phosphorus, copper, calcium, vitamin E and omega-3 fatty acids, brussels sprouts have a rightful place in the “super food” category.

From the fall through the early spring, Brussels sprouts can be bought while still on the stalks, and are a curious, bizarre, attention-grabbing vegetable.  Kids can pluck the sprouts off the stalk while you trim and cut them in half lengthwise or shred them.  They are more likely to try them if they help prepare them! 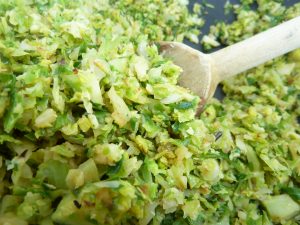 spectacular favorite, Kid Friendly Brussels Sprouts, which takes only a few minutes to make up in a skillet .  The sprouts actually taste slightly sweet when prepared in this manner, so this is a great way to introduce them to your family.

An orange a day may keep cancer away (and other diseases too). An orange has hundreds of different phytonutrients, many of which have been shown to have anti-inflammatory, anti-tumor, and blood clot-inhibiting properties, as well as strong antioxidant effects. Loaded with other nutrients as well, oranges add a great flavor punch to foods to brighten up the winter months.