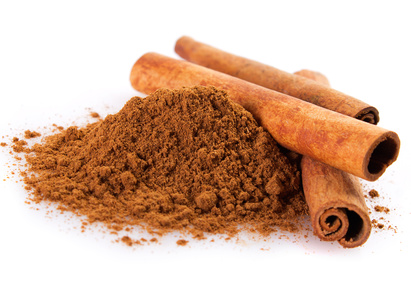 The widely used and loved spice, cinnamon, seems to be a major superhero in fighting disease and promoting our health. It’s just the inner bark of a Cinnamomum tree, yet has been highly valued for centuries as both a medicine and a spice fit for kings. Only a half teaspoon of cinnamon per day can help fight disease, promote our health, and maybe even help us think better. It’s an easy and delicious fix!

Two teaspoons of cinnamon contain almost half our daily need for manganese. This mineral is a potent antioxidant supporting both bone health and blood sugar control. Several other phytonutrients in cinnamon besides manganese also help prevent the demise of molecules. In studies, cinnamon prevented oxidation more effectively than all other spices (except mint), chemical antioxidants, and several plants, including spinach, chard, and red cabbage.

Cinnamon is also full of fiber and is a very good source of calcium. A recent research review concludes that cinnamon contains compounds that protect against chronic inflammation within the body, diabetes and insulin resistance, bacterial and fungal infections, cancer, strokes and heart disease, as well as protecting our brain. That’s quite impressive, given that it’s so widely available.

Seasoning a high carbohydrate food with cinnamon can lessen its impact on blood sugar levels. Cinnamon slows the rate at which the stomach empties after meals, reducing the rise in blood sugar after eating and helping fat cells burn rather than store.

Because cinnamon contains polyphenol polymers, which may act like insulin, the ability to respond to insulin is improved, so less insulin resistance occurs for more normal blood sugar levels. Research, including US Agricultural Research Service, suggests 1/2 teaspoon of cinnamon each day to possibly lower hemoglobin A1c in patients with poorly controlled type 2 diabetes, including those taking oral diabetes medications and insulin.

This spice appears to help stop the growth of bacteria as well as fungi, including the problematic yeast, Candida. In laboratory tests, the growth of yeasts that were resistant to the commonly used anti-fungal medication fluconazole was often stopped by cinnamon extracts. The cinnamaldehyde found in cinnamon may help reduce infections, fight tooth decay, and reduce bad breath.

Cinnamon may produce positive effects on brain function and disease. In research led by Dr. Zoladz, participants were examined while exposed to cinnamon, peppermint, jasmine, and no odor while working on a computer-based program. Smelling cinnamon improved participants’ scores on tasks related to attention, virtual recognition memory, working memory, and visual-motor speed.

Cinnamon has been shown to lead to various improvements for Alzheimer’s disease and Parkinson’s disease in animal studies. Two compounds found in cinnamon appear to slow the buildup of a protein called tau in the brain, which is one of the major characteristics of Alzheimer’s disease. Cinnamon helped to protect neurons, normalize neurotransmitter levels, and boost motor function in those with Parkinson’s disease.

The addition of cinnamon also acts as an effective preservative while improving flavor. Use cinnamon for extra flavor and a sense of sweetness without adding actual sugar. Cinnamon can be sprinkled generously on foods like oatmeal, yogurt, toast with almond butter, fruit or even mixed in your milk or hot chocolate. My cinnamon-loaded Healthy Granola recipe tastes great and is especially good in Greek yogurt. Packed in mason jars, this granola makes a wonderful gift!

Cinnamon is an excellent addition to savory dishes as well. Try adding it to curries, stews, chilies and Mexican dishes.

The highest-quality cinnamon, know as Ceylon cinnamon, comes from Sri Lanka and Vietnam, while ordinary cinnamon, Cassia cinnamon, usually comes from China or Indonesia. Both varieties contain the health-promoting nutrients, but Ceylon cinnamon is much lower in coumarin that can be toxic if ingested in large amounts. If you’re just generously using cinnamon in your cooking, you’re not likely to have a problem. But if you’re eating a tablespoon or more everyday, use Ceylon cinnamon rather than the common Cassia variety. As with everything, more is not always better. I’m not advocating cinnamon supplements, but rather using cinnamon more often and generously in meal preparation.

Cinnamon has been shown to have amazing anti-clotting properties for the blood that make it great for stroke prevention. If you are on medications such as Coumadin or Heparin, please consult your doctor to find out how cinnamon affects these drugs.

Take my Healthy Challenge this holiday month and add more cinnamon more often to your food in order to take advantage of its many health benefits. Cinnamon has been prized as a gift for kings throughout history, so why not give delicious recipes containing health-promoting cinnamon this holiday season.

A square of 70% or higher dark chocolate here and there will satisfy your cravings and provide you with amazing health benefits. Use cocoa powder in your cooking and baking too!