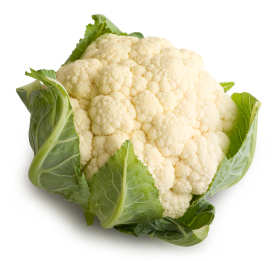 Cauliflower may pale in color next to its cruciferous cousins such as kale, Brussel sprouts, and broccoli, but not in terms of nutrition.  Like all of the vegetables in the cruciferous family, nutrient-rich cauliflower helps to strengthen the immune system and protect against the development of cancer.  Its blonde color makes cauliflower extremely versatile and easy to mask, while its flavor, if cooked correctly, adds surprisingly delicious enhancements to recipes.

Cauliflower is very low in calories (only 26 calories for more than a cup) while loaded with health-benefiting vitamins, minerals, and phytonutrients.  It’s an excellent source of vitamin C (67% of the recommended daily value in just three florets), vitamin K, and folate, and it is a very good source of vitamin B6, pantothenic acid, and manganese.  In addition, cauliflower is a good source of thiamine, riboflavin, phosphorus, and potassium.

High in fiber with 3.4 g per cup, or nearly 12 g in every 100 calories, cauliflower provides soluble fiber, which helps to lower cholesterol and keep blood-sugar levels steady, as well as insoluble fiber, which helps waste move through the digestive tract.  Cauliflower contains a phytonutrient called glucoraphin that appears to have a protective effect on your stomach lining.  When glucoraphin is present, your stomach is less prone to invasion by the bacterium Helicobacter pylori, thereby reducing the risk for stomach ulcers and cancer.

Cauliflower contains some very important disease-fighting phytonutrients, including indole-3-carbinol (I3C), which also appears to reduce the liver cells’ production of the main carrier of bad cholesterol (LDL) to the tissues.  High levels of LDL are linked to atherosclerosis (deposits of plaque in artery walls), which is a major contributing factor to heart disease and stroke.

I3C, together with the phytonutrient sulforaphane, may help prevent cancer by inhibiting enzymes from activating cancer-causing agents in the body, and by increasing enzymes that clear out toxins and carcinogens before they damage cells.  Also, I3C appears to help to lower estrogen levels, thus possibly reducing growth of estrogen-dependent tumors.

I3C is also an anti-inflammatory compound that can actually operate at the genetic level, and by so doing may possibly prevent the initiation of inflammatory responses at a very early stage.  Vitamin K and other anti-inflammatory substances in cauliflower, including glucosinolates and isothiocyanates, can potentially  help decrease chronic inflammation, which raises risk of cancers and other chronic diseases (i.e. cardiovascular diseases, Crohn’s disease, insulin resistance, irritable bowel syndrome).

Many other phytonutrients in cauliflower, including kaempferol, ferulic acid, cinnamic acid, and caffeic acid, also help protect from free radical damage, thus reducing the risk for diseases caused by oxidative stress, such as cardiovascular disease and cancer.

According to a Dutch study in Stroke: Journal of the American Heart Association, it appears that while a diet high in assorted fruits and vegetables can lower the risk of having a stroke, the white ones had the greatest impact over a 10-year period.  A 25 g/day increase in consumption of white fruits and vegetables was associated with a 9 percent decrease in risk of stroke.

Cauliflower is not only healthy but also delicious when prepared correctly.  It’s also versatile, offering something for everyone.  Roasted cauliflower tastes like a different vegetable from the boiled cauliflower our mothers made.  Rather than boiling cauliflower or even steaming it, the drier cooking methods like roasting or sautéing bring out cauliflower’s natural sweetness while limiting the strong flavor that it gets when overcooked.  In particular, you avoid that water-logged, mushy texture.  For an easy side dish, try Roasted Cauliflower by seasoning the cauliflower to taste, or toss it with olive oil and salt and cook in a hot oven, until tender but crisp.

improving the flavor of the dish.  Use pureed cauliflower to replace cream in savory dishes for healthier cooking.  Try this tasty  Creamy Cauliflower Sauce for Pasta, which, similar to an Alfredo sauce, is a smooth white sauce made with cauliflower and freshly grated Romano cheese.  It looks and tastes like a cheese sauce, and even picky kids and adults will devour it.  Add greens or other colorful vegetables for less picky eaters.

There are some recipes for mashed cauliflower that are deceptively close in consistency to mashed potatoes.  Cauliflower holds more water than potatoes, so rather than boiling the cauliflower like most recipes suggest, it’s best to steam, sauté or roast them before mashing.  Add some plain Greek yogurt or cream cheese instead of butter and flavor with Romano cheese for a delicious side dish.

Try one of my family’s favorites, healthy Cauliflower Potato Cheese Soup.  It’s delicious, and unless you tell them, no one will have any idea that there is cauliflower in it.  In fact, adding cauliflower even improves the flavor.

For the more adventuresome eater, try this Cauliflower Red 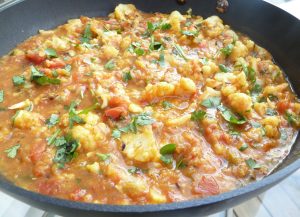 Lentil Curry.  Add cauliflower (either chopped or mashed) to foods like curries, soups, mashed potatoes, macaroni and cheese, stir fry, pilaf, risotto, Biryani (a rice and curry dish made with cashews and golden raisins), and anything else you think of.

November’s (2012) Healthy Challenge:  Take advantage of cauliflower’s delicious flavor and easy “hideability” by adding it to a variety of recipes for your whole family.  Picky eaters and foodies alike will enjoy and benefit from the awesome nutrition that cauliflower offers.

Blackberries are bursting with flavor, nutrition, and antioxidants to help the body fight free radicals. They contain some of the highest amounts of fiber and lowest sugar quantity of any fruit. Blackberries are the perfect fruit to eat to help prevent cancer and other chronic diseases like heart disease and diabetes, while still enjoying scrumptious food.

The Humble but Mighty Cabbage

Common, inexpensive cabbage is chock-full of powerful nutrients that fight disease and promote health in dramatic ways. Below, I will share the best ways to prepare cabbage to maintain its many nutrients and preserve its great flavor.