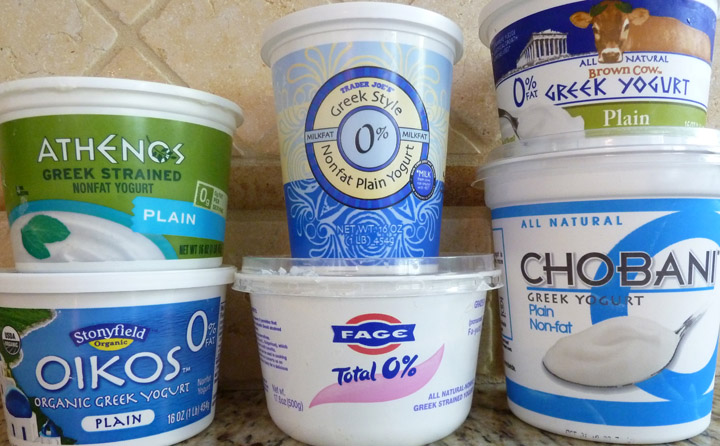 I’m always trying to find healthy, tasty ways to increase the protein in my teenage daughter’s diet since she declared herself a vegetarian (but not vegan) about three years ago. Greek yogurt contains almost twice as much protein as regular yogurt, with less sodium and sugar, so it’s a great way to help her get enough.

All the brands contain at least two and at most five live active cultures, except the Athenos brand, which contains no probiotics. None of these yogurt brands use cows treated with growth hormones, but only Stonyfield Oikos is certified as organic.

Regular American yogurt is higher in calcium, with 40% of our daily requirement of calcium while most Greek yogurt contains 30%. Trader Joe’s Greek yogurt (20%) and Fage (25%) are lower in calcium.

Greek yogurt has been strained, so much of the whey is removed and it is a thicker, creamier consistency than traditional American yogurt. This firmer consistency improves the texture when you eat it, but also makes it helpful to use when cooking.

If my daughter had been raised with Greek yogurt rather than our American version, she probably would like eating yogurt but, unfortunately, she is not much of a yogurt fan, so I have to be creative.
It’s easy to throw Greek yogurt in smoothies. My daughter likes yogurt parfaits with fruit and granola from time to time. I make it up and pass it to her on her way to school. I came up with a healthy Strawberry Yogurt “Pie” that can actually be eaten for breakfast, lunch, or dessert, using a granola crust. Try using Greek yogurt in baked goods to add protein and moisture, like in my Pumpkin Yogurt Muffins. Greek yogurt can be substituted into any recipe that uses sour cream, since the consistency is very similar to it, more than regular yogurt is. It’s great in dips too. Mix one part vanilla Greek yogurt with one part peanut butter for a fruit

Americans' love affair with potatoes has added to our weight problems, but purple potatoes may be the super spud we need to negate the downside of white potatoes while improving our health. No matter their size or shape, purple potatoes have royal benefits.

It feels like the holidays start the day after Halloween! Fortunately, the holidays are accompanied with all sorts of yummy treats and festive foods. One particularly aromatic spice that brings in holiday cheer is nutmeg.

Kale is arguably one of the healthiest vegetables available – so many nutrients packed in one food! Kale is in season during the cold months, so improve your health this month with this amazing superfood!