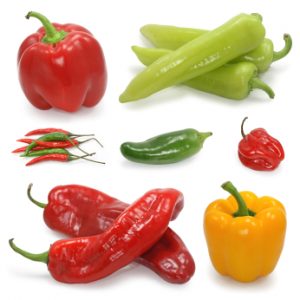 Chili (hot) and sweet peppers are both loaded with nutrition. Chili peppers are rich in fiber, vitamin C, vitamin A, vitamin B6, and potassium, yet extremely low in calories (20 calories in 3/4 cup chopped fresh hot pepper). Serrano peppers are amazingly high in anti-inflammatory properties as well.

Several studies have shown that eating spicy peppers decreases appetite, causing a person to eat more slowly and to feel full sooner. This is likely because they contain capsaicin, which sends a message to the brain that it’s time to stop eating. This same substance has also been found to slightly increase body metabolism. Being able to eat fewer calories while burning them a bit faster is helpful in the never-ending battle against weight gain, even if it’s only a few calories per day. Over a year’s time, the calories do add up.

Sweet red, yellow, and orange bell peppers don’t suppress appetite or speed up metabolism, but they are packed with nutrients. Red peppers contain about twice the amount of vitamin C found in a typical orange, and yellow peppers contain three and a half times the vitamin C found in an orange. In addition, one red pepper contains almost all of the vitamin A recommended for a day. These colorful, sweet bell peppers are also very high in fiber, vitamin B6, vitamin E, and folate. They are a good source of potassium, manganese, thiamin, riboflavin, niacin, and vitamin K, and yet are quite low in calories (35 calories in 3/4 cup of chopped fresh red bell pepper).

The list of bell peppers’ phytonutrients is also impressive. Besides flavonoids and hydroxycinnamic acids, these peppers contain more than 30 different carotenoids, including excellent amounts of beta-carotene and zeaxanthin. Both of these carotenoids offer antioxidant and anti-inflammatory health benefits. Since they are not spicy, you can use more of these peppers to bulk up the nutrients and fiber in your diet, while also adding delicious flavor.

September is the peak time for peppers, so now’s the time to start using fresh ones. If you don’t like spicy foods, but want to improve the flavor of your food and boost nutrition, start with a medium-hot chili pepper like poblano, banana or Anaheim. Be careful to get rid of the seeds and to wash your hands afterwards. If you use jalapeño, Thai or serrano chilis, and especially habanero chili peppers, you don’t need to add much to get a lot of heat! Many people add spice with cayenne pepper and don’t realize how much better the flavor can be by using fresh chili peppers. 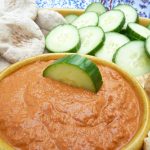 Brightly colored bell peppers are a perfect vegetable to serve to children, especially after school or while dinner is being prepared. Just leave them chopped up on the counter and they will be gone before you know it. They also make meals more delicious. Try Rachael Ray’s Roasted Peppers and Eggplant Marinara Sauce for a fabulous flavor. Only use half (or less) of a less spicy chili pepper like poblano if you want this sauce to be mild, but it is a delicious way to add hidden nutrition and it’s easy to freeze. For a quick meal using the grill, try this Grilled Pepper Pesto Paste dish. If you’ve never had Muhammara, you are in for a treat. It is a Turkish and Syrian dip made with roasted red peppers from a jar and ground walnuts, making everything you combine it with taste wonderful. This Roasted Corn and Black Bean Soup uses frozen roasted peppers for an easy, delicious meal.

Take September’s Healthy Challenge (2011) and eat both chili and sweet peppers while they are in season.

My favorite food staple is Pecorino Romano cheese. It makes food sing! Just a sprinkle of freshly grated Romano cheese on veggies, grains, and lentils takes these foods to a new level of deliciousness. With so much flavor, this cheese feels like an indulgence. Made from sheep's milk, Romano is good for your health and often works for people with other dairy intolerances.

The Breakfast To Sharpen Our Brains and Slim Our Bodies

A protein-rich breakfast can reduce hunger and keep us satisfied throughout the day and into the evening, according to several studies from the University of Missouri. Some of these studies used brain scanning techniques and found that a high-protein breakfast impacts different parts of the brain than a low-protein breakfast.