Quinoa (pronounced KEEN-wah) is a superfood from the Andes region of South America. Eaten by nursing mothers of the Inca Indians to improve their milk quality, and fed to their warriors to increase stamina, the Incas venerated this crop. While thought of as a grain, it is really the seed of a leafy plant, related to spinach. It’s loaded with nutrients and, unlike other grains, contains a complete protein with a quality similar to that of milk. One cup of cooked quinoa contains 8 grams of complete protein, nearly twice the amount of incomplete protein found in other grains.

Quinoa is also an excellent source of magnesium, iron, copper, and phosphorous, making it a 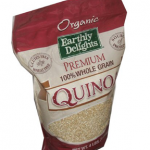 powerful source of antioxidants. Recommended for those suffering from migraines, diabetes and atherosclerosis, it is also effective for weight control, as the carbohydrates are released slowly during digestion, helping to avoid extremes in blood sugar levels. Also, it is higher in fiber than oatmeal, making people feel full longer. Quinoa is gluten-free and tolerated well by children with grass allergies and asthma.

Quinoa is often eaten as a hot cereal cooked with milk or water and sweetened with agave nectar or brown sugar, similar to oatmeal. It can also be used to make a pilaf. To help children become accustomed to quinoa, start by offering it as a hot cereal mixed with an equal portion of oatmeal. Always rinse the quinoa before cooking to eliminate a bitter taste unless the label indicates it is pre washed. Toast the quinoa in a dry skillet for a few minutes before cooking to bring out its wonderful flavor. Because it is lower in carbohydrates than most other grains, it cooks in about half the time of regular rice; use two parts liquid to one part quinoa. One cup dry quinoa yields four cups cooked. Vegetables tossed with cooked quinoa and mixed with seasonings and dressing make tasty salads. This Quinoa Cranberry Apple Salad made with parsley, celery, dried cranberries, apples

and white balsamic vinegar is terrific. Add pomegranate seeds, mandarin oranges, and/or sunflower seeds to make other variations. Quinoa Garbanzo Tomato Salad is another winner worth trying, with even more protein. Vegetable soups made with stock, sautéed onions, garlic, and quinoa are flavorful and versatile. Muffins and breads made with quinoa are a high-protein, nutrient-packed bread choice. Try these Banana, Pumpkin or Sweet Potato Quinoa Muffins. Experiment in the kitchen with this “super-grain” and you will find spectacular ways to cook and serve it, so that quinoa can become a healthy part of your diet.

This high-protein seed is commonly confused with marijuana, but it's actually from a different plant in the same family. Although it doesn't contain the psychoactive substance found in marijuana, it is loaded with impressive nutrients.

A square of 70% or higher dark chocolate here and there will satisfy your cravings and provide you with amazing health benefits. Use cocoa powder in your cooking and baking too!

We've all heard that red wine is beneficial to our health, but it’s actually the grapes used to make wine that provide such amazing health benefits. These delicious berries may even help us live longer.