I attended a session at the Academy of Nutrition and Dietetics’ Food & Nutrition Conference this past fall in Atlanta, which honestly made me giddy with excitement. This session, presented by leading researchers in the field, shed new light on the role of water intake and weight loss: Cells in our body need to be swollen with water to burn body fat. Dehydrated cells are not able to burn the calories we eat as efficiently. Burn more calories and body fat while decreasing daily calorie intake by drinking a sufficient amount of water every day.

While many have claimed there isn’t yet enough research to directly connect water consumption with weight loss, Dr. Jodi Stookey at Children’s Hospital in Oakland demonstrates that many studies in the exercise physiology literature have already been completed to show our need for water to burning fat. In fact, 25% to 40% more fat is burned when water (rather than caloric drinks) is being taken in during moderately intense exercise. Of course, the sugar in sports drinks is often needed for energy during intense or lengthy exercise, as well as the electrolytes included in these beverages. However, we don’t need extra energy and electrolytes while we are not exercising, and especially not while eating a meal. On the contrary, we want to burn fat stores, rather than lock them up.

Caloric beverages consumed with meals stimulate our body to produce insulin too quickly and for too long after the meal, which shuts down fat cells from burning energy. Food stimulates insulin, but at a slower pace and for a shorter time, especially if the meal is high in fiber and protein while low in sugar and refined white flour (high glycemic foods). Drink water instead of other beverages during your meals so that you can burn those calories more efficiently. Someone in the audience at this conference asked about drinking milk as a beverage with meals and snacks, given the crucial nutrients in milk. In regard to weight loss, Dr. Stookey recommended replacing milk with yogurt. She pointed out that milk was one of the caloric beverages used in the studies that revealed water’s advantage in weight loss. The sweet taste of diet drinks still stimulates insulin that decreases the breakdown of fat cells even though they don’t contain calories.

Water is void of calories, so you receive the extra benefit of saving calories when you skip caloric drinks. Research shows that people don’t eat additional food to compensate for calories saved from drinking water instead of caloric beverages (although the same can’t be said about diet sodas). Even decreasing calories by 300 every day makes a difference over time. Given that caloric beverages are mostly simple sugars, the calories saved are even more helpful to your body weight. We often confuse our bodies’ signals for thirst as a sign to eat. Sometimes our mouths just need something to do. Water fills you up, and it doesn’t add on calories the way that munching on snacks does.

Drinking water can help us lose weight by revving up our metabolisms. A 2004 study published in the Journal of Clinical Endocrinology and Metabolism found evidence that water speeds up the rate we burn calories by as much as 30 percent within just thirty minutes of drinking it. That may not sound like a lot of extra calories burned, but it adds up over time, and it is especially significant when water is consumed along with a meal (or before/after a meal). 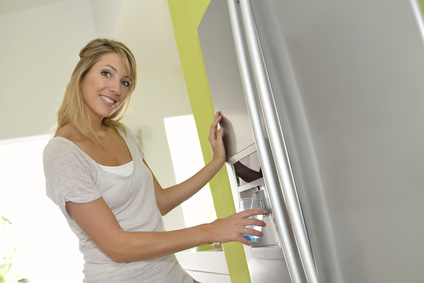 If you are thirsty, your body is already dehydrated by 1-2%. You’ve probably heard that about 60 percent of your body is made up of water. Water plays an essential role in digestion, absorption, circulation, the creation of saliva, the transportation of nutrients, and the maintenance of body temperature. However, the Centers for Disease Control (CDC) estimates that 43 percent of adults drink fewer than four cups of water a day, and 7 percent don’t drink any water at all.

To check periodically how you’re doing in terms of water intake, take a look at your urine. It should be clear or a very faint yellow. Douglas Kalman, Ph.D., R.D., a professor of sport nutrition at Florida International University in Miami, recommends you divide your weight in half to estimate the number of ounces of water you need to drink per day (150 lbs = 75 oz. of water). If you exercise rigorously enough to sweat, shower after your workout and weigh yourself. For every pound lost through exercise, you need to drink 16 ounces, 2 cups, or about 1/2 liter of additional fluid. Some of that fluid should contain carbohydrate and electrolytes (like milk), or you can consume food with your water to replenish your muscle energy and electrolyte stores.

I recommend that you have water within arms length 24/7. Drink a big glass of water in the morning right when you wake up and right before you go to sleep. Leave a glass of water on your desk or kitchen counter. Every time you notice it, take a drink. Carry a water bottle with you wherever you go, and sip often. However, there are some medical conditions that require the prevention of high fluid intake, such renal disease and congestive heart disease, in which case you should consult with your doctor about an appropriate daily fluid intake.

We need to drink water to burn fat. When our cells are low in water, they store more fat instead of using it for energy. Of course, once the cells are completely hydrated, more fat won’t be burned if you drink more water. But drinking frequently and consistently ensures that the fat cells can keep on burning energy to their full capacity. However, don’t be tempted to just drink water without eating a healthy diet: if you go without food, your metabolism slows down and offsets the benefits of drinking more water. Death from drinking water only occurs when people can drink faster than they urinate. In fact, people who have died from too much water are those that consumed around three liters (a full day’s amount of water) in only an hour.

Keto Versus Intermittent Fasting: Which is Best?

When it comes to weight-loss diets, both the keto plan and an overnight intermittent fasting plan are effective weight-loss strategies — for the short term, anyway. People swear by one or the other, but as a wellness dietitian, I want to point out a few of the hidden costs of the ketogenic diet in contrast to some of the benefits of an overnight intermittent fasting regime. Just hear me out on this one!

Does it matter when you eat your food? A growing body of evidence suggests that an overnight fast, aligned with darkness and your body's nighttime response, may be a critical piece of the weight loss puzzle.