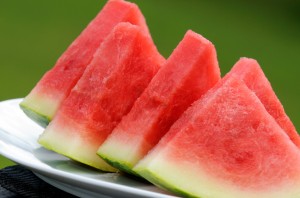 Summer can be both fun and nutritious! True to its name, watermelon is about 90% water – it’s nature’s gift to beat summer thirst. But along with the water and fruit comes powerful nutrients!

Watermelon has the highest concentration of the powerful phytonutrient, lycopene, of any fresh fruit or vegetable. Lycopene is a well-known antioxidant that helps fight disease, especially prostate cancer. Lycopene also fights inflammation as does Cucurbitacin E, another important anti-inflammatory phytonutrient in watermelon.

Watermelon is a great source of potassium, which helps regulate muscle and nerve function, maintains the body’s electrolyte and acid-base balance, and lowers the risk of high blood pressure. It’s also a very good source of vitamin C, pantothenic acid, copper, biotin, vitamin A, vitamin B1, vitamin B6, magnesium, and fiber. That’s a lot of nutrition packed into this low-calorie treat, at 40 calories per cup!

Watermelon also contains the amino acids citrulline and arginine, which help maintain arteries, blood flow, and overall cardiovascular function. There’s even some preliminary evidence from animal studies that greater conversion of citrulline into arginine may help prevent excess accumulation of fat in fat cells. A Purdue University and University of Kentucky study found that mice given a diet including watermelon had lower weight, cholesterol, and arterial plaque than the control group. It’s only an animal study, but who knows – it might help us in our fight with fat weight, and it can’t hurt to try! 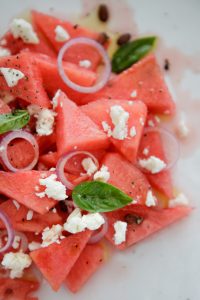 Contrary to some information that you’ll find on various websites, seedless watermelon is not a result of genetic engineering, but rather of hybridization. So, no GMO worries there.

The thumping method of finding a ripe watermelon has a method to its madness. A fully ripened watermelon will have a deeper, hollower bass sound rather than a solid and shallow soprano sound.

So enjoy watermelon’s juicy and thirst-quenching crunch this summer! Take a healthy challenge this summer and indulge in watermelon. It’s a great tasting and nutritious replacement for less healthy summer treats.

Garbanzo beans, also called chickpeas, are great with regards to their amazing nutritional content, the potential for weight-control and chronic disease control, and culinary versatility. Incredibly high in fiber, only two cups of garbanzo beans provide the entire daily recommendation of fiber for women, and a little less than three cups for men! It gets better: in a recent study, two groups of participants received about 28 grams of fiber per day; one group received dietary fiber primarily from garbanzo beans, and the other group received their fiber from entirely different dietary sources.

It seems that people either love sweet potatoes or they don’t. Given their sensational nutritional value, those who don’t immediately love them may want to give them another try. They can be kid-friendly and delicious if cooked correctly, and they are terrific roasted or baked because they begin to caramelize while cooking.

My favorite food staple is Pecorino Romano cheese. It makes food sing! Just a sprinkle of freshly grated Romano cheese on veggies, grains, and lentils takes these foods to a new level of deliciousness. With so much flavor, this cheese feels like an indulgence. Made from sheep's milk, Romano is good for your health and often works for people with other dairy intolerances.